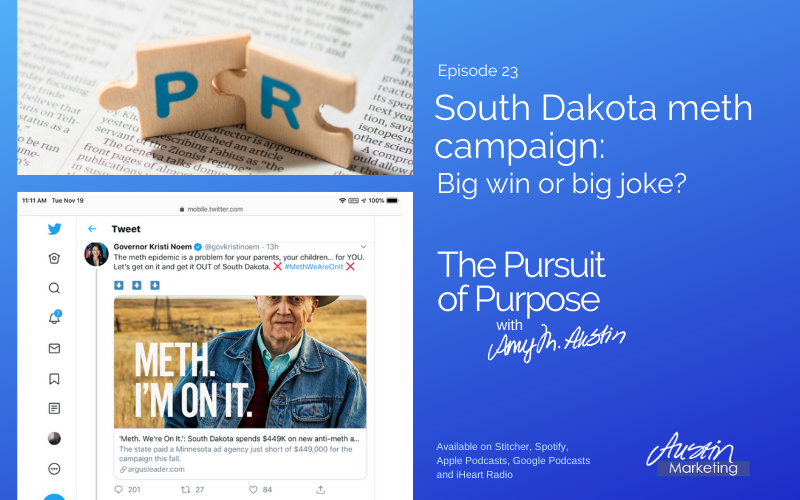 South Dakota’s meth campaign drew a lot of attention recently. But was it good attention? Or is it a big joke?

It depends on who you ask. As a native South Dakotan, the majority of the comments I’ve seen about this campaign are from friends and family who still live in the state. Most of their comments – and those on local news outlets Facebook pages – are overwhelmingly negative. Either they view it as a joke or they are outraged at the amount of money spent on its development. (Or both….)

However, there are positive comments about it over on LinkedIn – complemented by an equal amount of negatives. The positive comments center on the fact the collective public is talking about the campaign – it is getting attention and starting conversations.

And the negative comments center around the use of double entendre, the amount of money spent on the production of this campaign, and the fact it was done by an out-of-state agency. There are also comments questioning whether adequate message testing was completed and how other agencies in South Dakota (specifically the tourism board) feel about what is becoming a new tagline for the state – one that is in conflict of South Dakota being a vacation destination.

I have mixed feelings.

Shock factor headlines are always a risk. They are intended to immediately grab your attention and get you talking about whatever product or service the ad is promoting. This one certainly does that. And it does draw attention to the meth problem in South Dakota. I certainly have learned more facts about that in the last several days than I knew previously.

But when the whole country is focused on the CREATIVE message rather than the problem, it is hard to say this campaign was a success.

Let’s break down the message

Advertisers no longer have control over the conversation. You need to be mindful of how consumers are gonna take it and run with it in their own way.

One comment I found on a local TV station’s Facebook page from a woman who has been off meth for 10 years said that the campaign message did not and would not have appealed to her while she was using the drug.

For the sake of the people in South Dakota, I hope the campaign does become a success. I hope they see a decrease in the number of meth arrests across the state and an increase number of people seeking treatment at the facilities/services presented on the website.

And one success for now – there are a lot more people talking about South Dakota than there were a week ago.

As always, in pursuit of purpose,

Resources cited in this episode:

Amy Austin of Austin Marketing helps her clients find clarity in their branding, challenging them to look at the core purpose of their business and using that to develop marketing strategies to build an authentic and thriving business. After spending over 20 years in hospital marketing departments, she started her business with the intent of moving marketing and branding from a tedious task and source of frustration to one of business transformation and confidence. She has been included on eVisit's list of 25 Healthcare Marketing Experts to Follow as well as the Top 100 Healthcare Marketing blogs. Let's talk about your current marketing challenges and how I can help. Schedule a call with me today.

This site uses Akismet to reduce spam. Learn how your comment data is processed.